Home | Anime | Does my melody have a crush?
Anime

Does my melody have a crush? 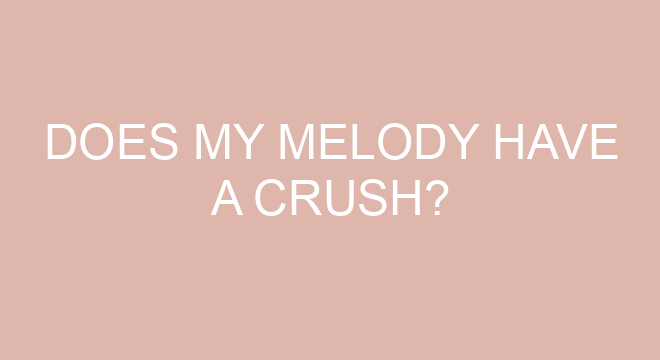 Does my melody have a crush? She has a crush on Keichii. When she sings she can power up the Melody Tact by singing, just like how Jun and Keichii power up the Melody Key. In episode 4 of the first series, it is mentioned that her mother is a “Star in the Heavens”, meaning she passes away long before the events of the series take place.

Who is Hello Kitty’s boyfriend? Dear Daniel (ディアダニエル, Dia Danieru), also known by his full name Daniel Starr (ダニエル・スター, Danieru Sutā), is a Japanese male bobtail cat just like Hello Kitty herself, Daniel is a cat based character from the Japanese company Sanrio. He is Hello Kitty’s childhood friend and also her boyfriend.

Does my melody have a crush? – Related Questions

Does Kuromi have a love interest?

When Kuromi ventures into the human world, she meets, teams up with, and even falls madly in love with Keiichi Hiiragi, a popular high school boy in Yumegaoka.

Is my melody a girl?

Is Choco cat a cat?

Chococat is a very spunky cat who loves to play around. Chococat is one of the Sanrio characters, popular like Hello Kitty, he loves to fool around with his best pals. Special talent: He’s always up on the latest news – thanks to his ultra-sensitive “antenna” whiskers – but can be a little scatter-brained at times.

What gender is Pompompurin?

Does Gudetama have a gender?

Gudetama has no gender because it is an unfertilised egg. Often depicted laying on an egg white as a bed, while also using bacon as a blanket.

What is Hello Kitty’s age?

How Old Is Hello Kitty In The Series? According to Sanrio, Hello Kitty was born in 1974, making her around 48 years old. However, in the series, she’s a 3rd-grade student, which puts her at about 8 to 9 years old.

He’s Keroppi (Ker-row-pee), a frog. She’s been top cat for 20 years, but now Keroppi, a younger rival, is practically as popular. Created in 1976, Hello Kitty is the leading character of Japan-based Sanrio Inc.

Why do they run so weird in Devilman Crybaby?