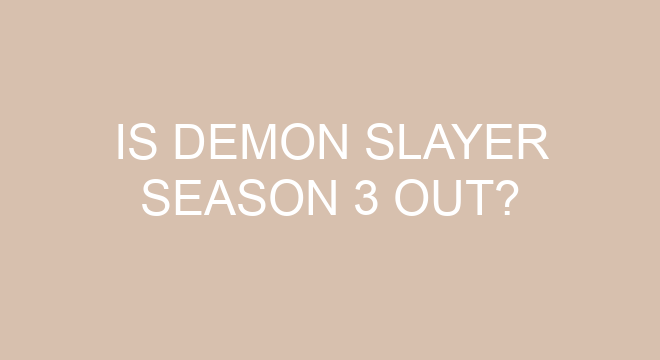 Is demon slayer season 3 out? More information on season 3 of Demon Slayer: Kimetsu no Yaiba will come out on Decem. It will appear after Demon Slayer The Movie: Mugen Train, which will broadcast on Japanese television on that date. The first episode of the anime version of Mugen Train will also air before the movie.

Is Mugen Ressha-hen a recap? Meanwhile, the “Mugen Ressha-hen” you are referring to falls between S1 and S2 to recap the story that the movie covered, with a brand new first episode featuring Rengoku on the previous day and another six episodes with 70 added scenes and new music tracks.

Which Hashira can beat Tanjiro?

Going beyond this, Giyu is one of the most combat proficient Demon Slayers seen throughout the entire series. Furthermore, his strength and abilities are always portrayed as seemingly a cut above the rest of the Hashira, solidifying his expected victory against Tanjiro.

Will there be season 4 of Demon Slayer?

This time around it happened in real-time, as Katanakaji no Sato-hen (“Swordsmith Village Arc”) was announced as Yuukaku-hen ended.

See Also:  Why can't I find Chesapeake Shores on Netflix?

What is demon slayer Yuukaku hen about?

Synopsis. The devastation of the Mugen Train incident still weighs heavily on the members of the Demon Slayer Corps. Despite being given time to recover, life must go on, as the wicked never sleep: a vicious demon is terrorizing the alluring women of the Yoshiwara Entertainment District.

What is season 2 of demon slayer called?

The second part is titled Demon Slayer: Kimetsu no Yaiba – Entertainment District Arc which aired 11 episodes, from Decem, to Febru.

There was a two-and-a-bit year gap between the first and second seasons of Demon Slayer, and we’d expect the same for its third outing. So while there is currently no announced release date yet for Demon Slayer: Kimetsu no Yaiba Swordsmith Village arc, we’d guess the third season will release around fall 2023.

What order should I watch Kimetsu no yaiba?

What is the chronological order of Demon Slayer?