Home | Anime | What comes after SAO War of Underworld?
Anime

What comes after SAO War of Underworld? 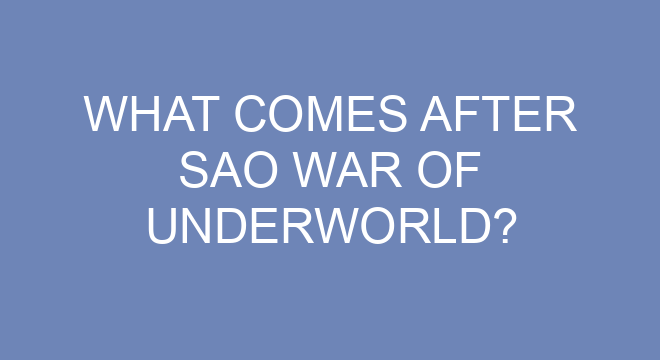 How many episodes will SAO war of underworld have? The second half of the War of Underworld series was originally scheduled to premiere on April 26, 2020, but was delayed to air from July 12 to September 20, 2020, due to the COVID-19 pandemic.
…

Is Sao War of Underworld finished? War of the Underworld came to an end with its 23rd episode, and while the Alicization Arc has been put to rest, there are still some lingering questions following the season finale.

How many episodes will SAO War of Underworld Part 2 have? For the sake of part 2, we are treated with 11 episodes with the ultimatum to conclude this saga. As the longest story arc to date, SAO Underworld wanted to fully capitalize its themes such as identity, loyalty, and love.

What comes after SAO War of Underworld? – Related Questions

What episode does Kirito fight in War of Underworld?

See Also:  What language is spoken in Antarctica?

Will there be season 5 of SAO?

The ending of SAO: Alicization – WoU teased the “Inter-Intelligence War”. However, there is still no information about this in the available light novel volumes. What we know so far is that the story is still ongoing, with volume 26 as the latest.

Who is Star King Kirito?

How does SAO end?

Kirito opens the box only to find Alice inside it. Looking at Kirito, Alice loses her calm and confronts him for having stayed behind in the underworld. The two then duke each other out in a sword fight in Kiriko’s family dojo where Alice emerges as the winner.

How many episodes will SAO Season 4 have?

You can watch all 23 episodes of the fourth season on Crunchyroll, FUNimation, HIDIVE, and Hulu.

Will Kirito stay in underworld for 200 years?

Unless he can defeat Gabriel and make it back to the real world before the maximum-acceleration phase begins, Kirito will have to spend the next 200 years in the Underworld.

See Also:  Who does Yuuki marry in Princess Connect?

Is Alicization the end of SAO?