Home | Anime | What is the second season of The Familiar of Zero?
Anime

What is the second season of The Familiar of Zero? 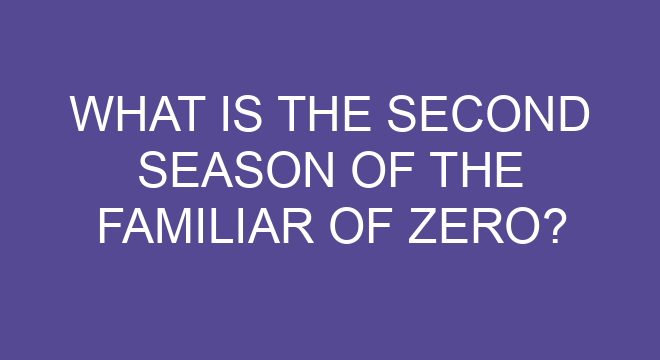 Does Familiar of Zero have ova? Although the OVA is essentially episode 6.5 of season 3, you can choose when you want to watch it. You can either watch the OVA before moving on to the seventh episode of the third season, “Rondo” of Princesses, or hold off until after you’ve finished up the third season since the OVA is a self-contained episode.

Did Saito and Louise get married? they tech never married, they didnt have someone oversee the vows which plays a part in it, plus Saito died anyways.

Does Familiar of Zero have an ending? By opening the World Door Louise transports the two of them to Japan for their vacation together. Enamored by Saito’s home Louise soaks in everything she can. The last scene is the happy newlyweds standing outside the Hiraga home while Saito rings the doorbell to introduce his new wife.

What is the second season of The Familiar of Zero? – Related Questions

See Also:  Who will marry Alibaba in Magi?

Who does Saito end up with?

After Saito sets his mind at ease (though his contract with Tiffa had run out, his contract with Louise kept him alive). With the Dragon dead, Saito then proposed to Louise and they were married. After their wedding Louise used her magic to go to Saito’s world to visit his parents.

What comes after the Familiar of Zero?

Is Saito still in limbo?

Both Cobb and Saito awake from Limbo, presumably having shot themselves, and Saito immediately honors his agreement to Cobb, allowing him to return to his family with a single phone call.

Does Saito and Louise have a child?

See Also:  Who is the MC in World Trigger?

Does Saito go back to Japan?

Using Saito’s Livesatille powers, Louise opens a door to Japan, but when Saito steps through Louise openly states she loves him, before closing the door, trapping him in his world. Louise tells everyone that she put Saito back in Japan.

Is the asterisk war on Netflix?

What if a Fishman ate a devil fruit?