Home | Anime | Where is Kawaki wo Ameku from?
Anime

Where is Kawaki wo Ameku from? 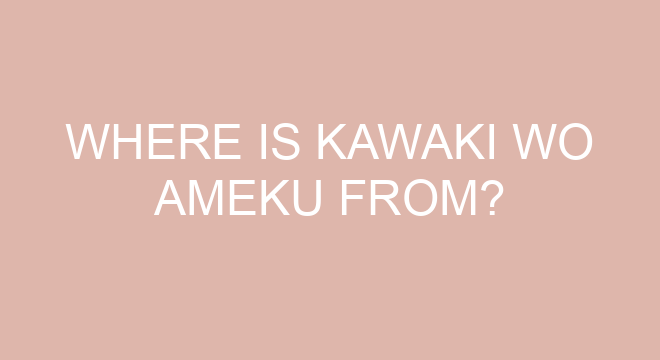 Where is Kawaki wo Ameku from? Called ‘Kawaki wo Ameku” (aka ‘Crying for Rain’ or カワキヲアメク) and performed by Minami, it is one of those rare Japanese anime opening theme songs that is massively powerful and has an utterly addictive chorus and melody.

Are Mori and Minami still together? Why did Minami and Mori break up? While the pair initially appeared to feel at ease living with each other in the hotel, moving into an apartment together began to reveal their differences.

Who wrote BTS songs? RM, J-Hope and Suga are the designated songwriters among the seven BTS members. So, have you ever wondered what inspires the trio to dish out those beautiful lyrics in BTS songs. Well, at least one of them, Suga, has opened up about his inspiration behind the songs he writes.

Who sang Kawaki WO Ameku? Kawaki wo Ameku is a Russian album released on 05 Feb 2021. This album is composed by Подсухина Маргарита Сергеевна. Kawaki wo Ameku Album has 1 song sung by Sati Akura.

Where is Kawaki wo Ameku from? – Related Questions

Will Minami release an album?

Takao Minami releases new album (LP record), “THE TETORAPOTZ” as one of a band member of THE TETORAPOTZ on 9th September 2022.

Does Minami write her own songs?

Who is Blackpink songwriter?

See Also:  Who is stronger Zegion or Diablo?

Is Minami a name?

What is the plot of domestic girlfriend?

Domestic Girlfriend tells the story of the conflicted feelings of Natsuo towards his first love and the girl he lost his virginity to; the controversial and conflicting nature of romantic relationships between step-siblings and also between a teacher and a student while highlighting the themes of youth, family, …

What genre of music is crying for rain?

New wave pop rock. “Crying in the Rain” is a song composed by Carole King with lyrics by Howard Greenfield, originally recorded by American duo the Everly Brothers. The single peaked at number six on the US Billboard Hot 100 in 1962.
…
A-ha version.

Who was the 14th king of Israel?